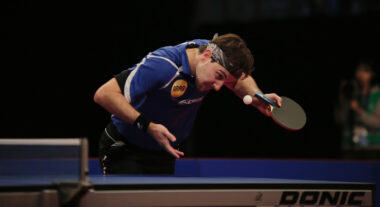 Timo Boll has had a fantastic 2017. He won the Korean Open, reclaimed the German National Championship and helped Germany become European team champions again. And then he made it all the way to the final of the Men’s World Cup, beating world number 1 Ma Long in the semi-finals. We can all learn from Timo Boll. I’ve watched a lot of his matches recently and I’m going to share some things he does particularly well. So if you want to try and play a bit more like Timo Boll, here’s some things you should try and do… Keep reading

When I coach, I always encourage players to attack with topspin. But there are situations when a flat hit is absolutely fine, and may even be the best option. The key is to use the right shot in the right situation. So in this blog post I will explain when you should topspin and when it is ok to flat hit. Keep reading