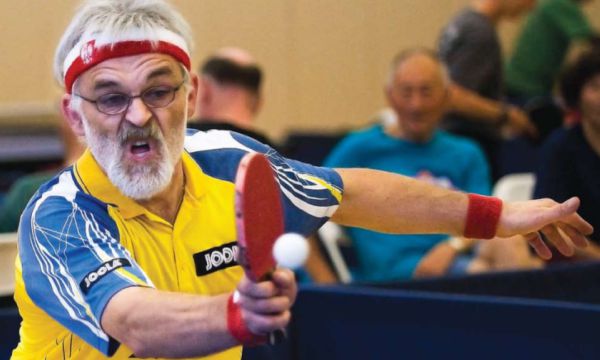 Table tennis has always been a popular sport with older people. It’s a sport you can play competitively even if you are 60, 70, 80 or 90 years old.

Just this week Table Tennis England shared a story about 90-year-old Alan Biggs who at the age of 90 has a 50% win percentage in his league in Liverpool.

This is amazing! 90-years-old and still winning half of his matches.

As we age, we do decline physically. We are not as fast, strong and nimble as we once were. But the great thing about table tennis (at the amateur level at least), is that power and athleticism are not essential to win matches.

There are many ways to play and win, which do not require the brute strength and physical conditioning of a 25-year-old professional table tennis player.

If you’re a senior player (60 years+), what is the best way to compete with, and beat, younger players? In this blog post, I give nine areas you can focus on to help you get the better of your younger, fitter and stronger opponents.

Thanks to Richard from the USA for suggesting this topic for a blog post.

Ball placement is your biggest weapon. You do not need to learn any new shots. Just use the shots you are already good at and improve where you put the ball.

2. Switch the direction of play

A simple tactic is to keep switching the direction of play. Put one ball to the backhand. Put the next ball to the forehand. Put every ball in a different part of the table.

Make your opponent react to your shots. If you do this tactic with very good ball placement, then you can turn your younger opponent inside out.

If you can control the rallies in this way, your opponent moves more and you move less.

3. Play close to the table

Try to stay close-ish to the table when you play. This may be harder at first, as you have less time to react to your opponents shots. But if you get good at this, it has three main benefits.

Serves are the great leveller. Being good at serves has nothing to do with age, strength, speed or fitness. It’s all to do with spin, placement, variations, deception and massive amounts of practice.

If you have strong serves, you will win points against any player of any age.

5. Vary your return of serves

Return of serves has very little do with power and athleticism. Any player at any age can be good at returning serves.

Up to a certain level, you don’t need to worry about playing blistering return of serves. Your focus should be on reading the spin correctly, returning the ball low over the net and trying to get a good ball placement.

Make your opponent play another shot. Keep him off balance. Make it hard for him. Use a variety of shots – pushes, drives, flicks and topspins.

Playing a high energy topspin game becomes harder as you get older. But you don’t have to take the young player on at his own game.

Instead you can frustrate a lot of younger players with a playing style of push, block and counter attack. This is where you make it hard for your opponent to attack with heavy backspin pushes. If he does attack, then you do a quick block. This can often result in a mistake or a weak shot from your opponent, giving you an easy counter attack shot.

Your young opponent puts in all the effort. You beat him without breaking sweat.

It does take lots of practice to get good at this style of play. And it may not be effective against really good players. But you should enjoy a lot of success with this style, especially in lower local league divisions.

Your opponent may be younger, fitter and stronger. But you have more life experience and a more mature brain. Use this to your advantage!

Try to analyze where your younger opponent is weaker. Does he have a weaker backhand or forehand? Is he weaker at the backspin game or topspin game? Does he struggle with wide balls? Is he weak in the middle?

Work out where the weaknesses are and then go after them relentlessly.

One of the advantages many older players have, especially those who grew up in the hard bat era, is using unconventional strokes.

Don’t worry if your strokes are a bit weird. As long as they are consistent, they can actually be hugely effective.

Table tennis is becoming more homogeneous. Younger players are coached in a very similar way (topspin, topspin, topspin), which means they are very used to playing with similar players.

Do something different. Use your ugly strokes. Confuse your young opponents with strange actions, disruptive timings and excessive spins.

9. Learn to use pimples

A final option, is to use short pimples, long pimples or an anti-spin rubber on one side (or both) of your racket.

This isn’t a magic solution. You still need to learn how to use the pimples or anti-spin effectively.

But it can give you an advantage over younger players, especially in lower divisions. The change of spin, the change of speed, the different types of shots can really disrupt the other player.

You often hear players complaining about pimples and anti-spin, but it’s entirely legitimate. These rubbers can really help an older player compete (and beat quite easily) opponents who are much younger.

I know many older players who can still hit the ball really hard. This is great! If you can hit the ball hard with good consistency, then do it.

But I also know lots of other older players, especially those 70+, who find it harder to generate the sort of power to finish off a point. The good news is that you do not need lots of power to win points.

All of the suggestions above do not require big power or youthful athleticism. Any person of any age can do them. And they are all very effective.

I’m not saying all of the above is easy. It’s not. You still need to practise lots and lots to get really good at it.

But the point is that all these skills and tactics are a bit kinder on the body and don’t require silly amounts of athletic effort.

You don’t have to focus on all 9 skills and tactics at once. Just pick 1, 2 or 3 areas to focus on. It will make a difference to your game and allow you to win more points against those younger, fitter and stronger opponents. 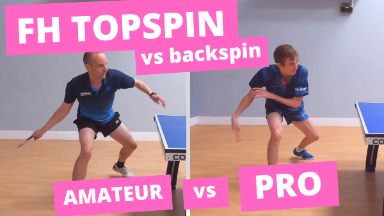