One way to add an extra dimension to your game is to develop shots which disrupt the pace of the game.

These are shots which unexpectedly change the speed, spin, length or direction of the ball.

Examples of these shots are the chop block, fade, around the net, wiggly (all of which I filmed with fellow coach Craig Bryant earlier in the year – click on the links to watch demonstrations).

Other examples may include a push with sidespin, a smash with backspin, taking the ball off the bounce, strawberry flick or even a slow and spinny topspin – all sorts of weird and wonderful shots.

In this blog post I explain why these types of shots are useful and when you should use them.

I should start by saying these sort of disruptive shots are more advanced level. If you are beginner and intermediate standard, I think it’s far better to focus mostly on developing traditional strokes – pushes, drives, topspins, flicks. You can come back to these disruptive shots when you feel confident in doing all the basics well.

But if you’re already an advanced player, then developing some disruptive shots will add more variety to your game.

I played with Craig Bryant again recently. We were doing some filming on a new service video series. During the filming, Craig was mixing up traditional shots and weird shots.

When rallying, sometimes he would hit a blistering forehand topspin past me, other times he would take the pace off and add a lot of sidespin to take me out very wide or fade his attack in the opposite direction to which his bat was moving.

When returning my serves, sometimes he would flick aggressively to my backhand. Other times he touch very short or swipe with sidepsin or dig deep with heavy backspin.

And when he was serving (someone help me!!), sometimes he played ridiculously wide and slow sidespin to my backhand, other times he went very fast down the line to my forehand. If I did manage to get the ball back, I really had no idea what he was going to do next.

It was horrible to play against.

The uncertainty was making me anxious, making me tight, making me miss shots I would usually get.

It was very difficult to process what Craig was doing, when he was using unfamiliar looking strokes. My unconscious mind had no framework to deal with these shots, so I was usually too slow to react and made an error.

When should you use disruptive shots?

Disruptive shots can be hugely effective when playing against a traditional topspin player. Someone who wants to get into fast topspin rallies from mid-distance or even further back from the table.

By mixing in disruptive shots you can keep the topspin player off-balance. You give him different spins, speeds, lengths and angles, and then it becomes much harder for the topspin player to find an attacking rhythm. He will start making more errors or play weaker shots, giving you easier opportunities to attack.

And then when you do switch to more conventional topspins and flicks, you’ll probably find these are more effective, as your opponent is more uncertain about what you are going to do.

It’s the unpredictability of your play which can turn a good topspin player into an anxious wreck.

You can experiment and be creative with disruptive shots. No rules apply! Your main focus is playing strokes which unexpectedly change the pace, spin, length or angle.

It doesn’t really matter what you do or how unusual or unorthodox your stroke seems. You may even get comments from others that you are playing the shot in the wrong way. But as long as you can play the disruptive shot consistently, it will be effective against some players.

These shots can be good fun to practice. It provides a bit of relief and distraction from your normal training routine. Plus you also learn how to manipulate the ball through your bat angle, timing, contact point and stroke action.

If you’re learning to play table tennis, don’t worry too much about these disruptive shots at the moment. This is something for the future.

But if you already play at a high standard and want to evolve your game, disruptive shots are something worth experimenting with.

You do need to practice them quite a lot to make them consistent. But if you can master a few disruptive shots you can use these to really mess up your opponent. 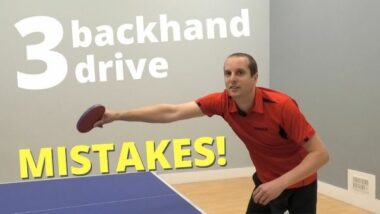 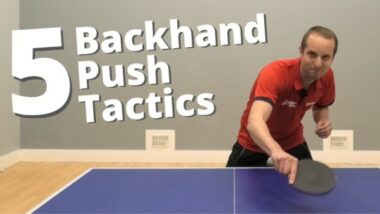