In recent years JOOLA has produced a number of excellent rubbers. We have the Rhyzer rubber series, followed by the Dynaryz rubber series and most recently the Rhyzen rubber series.

Admittedly, there are quite a few ‘R’s, ‘Y’s and ‘Z’s in the names, making them sound quite similar, which leads to a little confusion! And there is a lot of choice. In total there are 10 different rubbers in these three product lines. It can be a little tricky to work out which rubber will be best suited to your game.

So I have decided to write this rubber comparison article to help players make an informed decision. I’ve tested all 10 rubbers over the past year. I’ve used the rubbers in coaching sessions, playing with my PowerPong Omega robot and also when competing in leagues and tournaments. Below I attempt to do a broad comparison and then make recommendations for different playing styles.

Let’s start with a comparison table. This is taken directly from the JOOLA rubber comparison chart. I haven’t changed any of the values, as they seem pretty accurate.

How useful is a comparison table like this? Are the numbers actually representative of a rubber’s speed and spin potential? Yes and no. All the rubbers listed above are fast and spinny. For a beginner or intermediate player, it may be difficult to differentiate between them. Even I struggle to tell the difference in speed and spin between many of these rubbers.

A lot also depends on your playing style and stroke mechanics. I use Rhyzer 43 on my forehand, and this has the slowest rubber rating listed above. But it’s not a slow rubber at all. I am able to play very fast forehand attacks. It’s just that some of the other rubbers on the list are even faster. So you can use the numbers above as a rough guide, but you should feel reassured that with every single rubber you can play fast and spinny shots.

The rubber hardness column is useful as it tells you more about the playing characteristics of every rubber. In general, a medium or medium-hard rubber will tend to provide more spin at lower speeds. A hard or hard+ rubber will tend to provide more spin at higher speeds. I struggle a little with hard rubbers as my strokes can often be short and controlled, and I can’t get enough speed or spin out of the rubber. Whereas with medium-hard rubbers I can still generate good spin with a shorter, more controlled swing.

Which rubbers are best?

The table above can be useful if you have a clear idea about your preferences for rubber hardness and rubber trajectory. But another way of deciding which rubber to choose is to match them to specific playing styles. Below I list five generic playing styles and recommend the best three rubber options for each style.

You like to play higher-arc topspin attacks. Against backspin balls, you like to let the ball drop a little and then spin the ball up over the net with heavy topspin. When in a topspin rally, you try to arc the ball up over the net and land it deep on your opponent’s side. You are comfortable playing a little further back from the table to give more space to play big looping topspins. You place a bigger emphasis on heavy spin, rather than lots of power.

You like to play more direct topspin attacks. In a topspin rally, your power topspins go lower over the net and you win points with a mixture of speed and spin. Against backspin balls, you take the ball earlier and can often win the point with your lower-arc topspin attacks. You take a bigger swing, use a straighter elbow and a flatter swing trajectory when attacking.

You attack with drives, punches and smashes. There isn’t much spin on your attacks, but you do play fast and aggressively. You like to play close to the table and hit the ball at the peak of the bounce. Attacking backspin isn’t a big strength, but if you can get into a topspin rally, you are capable of hitting your opponent off the table.

You like to mix up your play, using pushes, blocks, controlled topspin attacks and occasional smashes. You rarely try to over-power your opponents, but you win points with your variation, ball placement and consistency. When you do play topspin attacks, you try to get decent spin and place the ball well. You are happy to play a few controlled topspins in a row to force a mistake from your opponent.

You mostly rely on heavy pushes and consistent blocking to win points. You like to keep your pushes low, with lots of backspin, forcing your opponent to make mistakes or play weak attacks. You are happy for your opponent to initiate the attack and then block the ball back aggressively, or sometimes slowly for variation. If you get an easy ball, you will attack, usually with a flat hit rather than lots of topspin.

You need to experiment

With both the comparison chart and the playing style guide, you should have a much better idea about which of these JOOLA rubbers are suited to your game. However, I want to add a little caveat. You never really know whether a rubber will benefit your game until you actually try it.

In theory I should have struggled using Dynaryz AGR and Dynaryz ZGR, but I really like both of these rubbers and feel I can play really well with them. In theory Dynaryz ACC should be perfect for me, but for some reason I often over hit my shots. So until you actually try a rubber and play with it for a few hours, you just don’t know whether it is the right one for you.

And don’t be put off if any of the numbers in the table above seem too low. All of these JOOLA rubbers are fast. They are all spinny. You will be able to play great attacking shots with every one of them. It’s just that some are a little spinner and faster than others, but probably not as much as the numbers indicate.

The JOOLA Dynaryz, Rhyzen and Rhyzer rubbers are really very good, so I am very happy to recommend any of them. The quality and durability is excellent. And the price is far more reasonable than the latest Butterfly rubbers. It’s just a question of finding that perfect option for your game. Have fun experimenting! 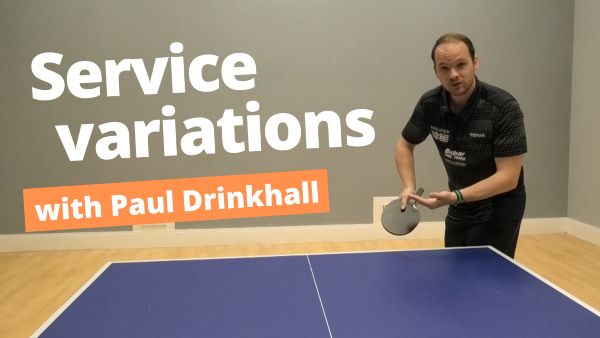