If you are an attacking player, ideally you will need fast rubbers which can add a bit of speed to your attacks.

When I switched from slower rubbers to faster rubbers, I instantly noticed that I was hitting more winners. I was playing the same shots, but the rubber was sending the ball over faster, making it harder for my opponents to return.

What makes a rubber fast?

There are several factors in rubber speed, but I’m going to keep things simple. Sponge design and sponge hardness play a role, but for me sponge thickness is key. A rubber with thicker sponge – 2mm and above – generally results in faster play. The balls sinks into the sponge and then propels forwards.

If you bounce a ball on a rubber and it comes off with a high bounce, then faster attacks are possible.

If you bounce a ball on a rubber and it only has a small bounce then, then your same attacks would be slower.

However, this is where it gets a bit complicated! Technique is the main factor in playing fast shots. So players with Chinese style technique (big swings, straighter elbow, big body rotation), and seemingly slower rubbers – can generate huge amounts of speed.

So really any sponge is fast, depending on how you play your shots. But with some rubbers you can generate more speed with less physical effort and these are the rubbers I am focusing on here.

There are hundreds of table tennis rubbers available to buy. A lot of them are fast. But I haven’t tried them all. So if a rubber you are thinking of buying isn’t listed below, it still may be very good and I simply have never tested it.

I strongly encourage you to try out other player’s table tennis bats to see what you like and don’t like. This is the best way of trying a lot of rubbers, without paying any money. Most players are usually happy to let you have a quick hit with their bat.

Here a few rubbers I recommend for fast attacking play. These recommendations are based on my personal experience. In the past I have played with Tibhar MX-P and I currently use JOOLA Dynaryz AGR. Both are very good rubbers and very fast. But all rubbers listed below are excellent choices.

You can also do your own online research. You can find lots of reviews of almost all rubbers on the Revspin website. Pay most attention to reviews from players who describe a similar playing style and level to your own.

How fast can you go?

Of course, faster rubbers are generally a little harder to control, but if you are playing at higher-intermediate level and above, then you should have no issue in handling faster rubbers.

Faster rubbers won’t transform you into an attacking machine. Your technique is still the most important factor in how much speed your attacks have. Your blade is also important. But fast rubbers can certainly give you an attacking edge. 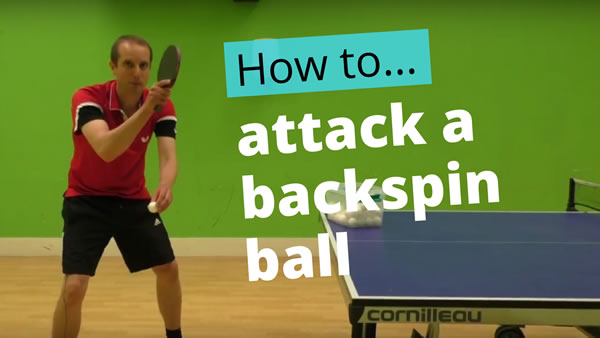