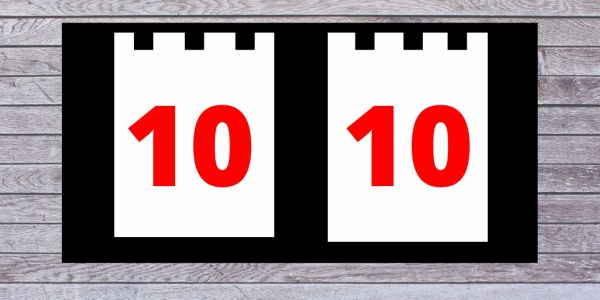 How should you try and win the game? Play if safe? Or take risks? Just keep the ball on the table and hope the other payer makes a mistake? Or take the initiative and go for a big attack?

With only two points needed to win the game, is it completely random whether you win or lose?

Or can your tactics and mindset help you win more than you lose?

This topic was sent to me by Frank from Germany. He has returned to table tennis after a break of 27 years. When looking at his statistics, he noticed that he was losing 75% of games when the score got to 10-10. Frank asked me what he could do to improve his success rate.

This got me thinking about my own performance when the score is 10-10. I’m a bit of a statistics nerd, so I delved into my match results over the past 6 years to see how many games I won when the score was 10-10. These are my results…

So my success rate sees to be pretty random. Some seasons I win more. Some seasons I lose more. Overall, over the past 6 years, I have won 55% of games where the score is 10-10.

I’m not massively happy with this. It’s good that I have won more than I have lost, but 55% is hardly a fantastic success rate. So what can I, Frank and you do differently to try and win more games when the score is 10-10?

When the score is 10-10, there is a temptation to play it safe. You’re at the critical part of the game. Two errors and you have lost. Your thoughts may switch to avoiding defeat and playing with caution.

This approach usually results in passive play, weak returns and half-hearted attacks. Of course, as you only need two points to win, this cautious approach may work. The other player may mess up.

But it’s a high risk strategy as the outcome is not in your hands. You are dependent on the other player. If he plays bad, you win. But if he plays well and takes advantage of your weak shots, then you lose.

With this approach, you’ll probably lose more than you win.

Be brave and play your best

I think a better approach is to go for your shots. Play positive strokes. Try to win the point, rather than hoping the other player messes up.

When returning your opponent’s serve – don’t panic. Stay focused. Try to read the spin. And try to return the ball in a positive way which puts your opponent under pressure. This could be a flick or a topspin. It could also be a positive push or a purposeful touch shot.

By the time the score has got to 10-10, you should have a good idea about where your opponent is stronger or weaker. Try to return the serve to your opponent’s weaker side. Apply pressure.

When it’s your serve, you should have a decent idea of what serve the other player has trouble with or returns in a predictable way. Use this serve. And try to serve it in the best way you can.

But make sure you recover after the serve. Don’t just serve, stop, watch and hope the other player messes up. Expect your serve to be returned and get ready to play a positive 3rd ball.

You don’t need to take massive risks when the score gets to 10-10. Don’t attempt wild shots which you don’t usually play. Instead, try to use the shots you do best and really commit to doing them as best you can.

Just focus on the process of playing and try to play the best you can to win those final two points.

Even if you play your best at 10-10, you still may lose. It’s only two points after all. The other player may play even better than you or hit two lucky shots.

But by really trying to play your best on these two points, you will increase amount of games you win when the score is 10-10.

And these two points can make a big difference to the outcome of the match and how many matches you win or lose over the course of a season.