Disruptive shots unexpectedly change the speed, spin, length or direction of the ball. Examples of these shots are the chop block, forehand fade, around the net, snake / wiggly, a push with sidespin, a smash with backspin, taking the ball off the bounce, strawberry flick or even a slow and spinny topspin – all sorts of weird and wonderful shots. You can find examples of these if you search on YouTube. Are disruptive shots effective? Will they win you points? Should you use them?

Players like rhythm. When we train, we like to hit topspin to topspin. The spin stays the same. The bounce is predictable. We feel comfortable. We play well. When we play matches, it’s really nice to play against someone who has a consistent rhythm. Win or lose, we know what to expect, and usually play pretty well. Rhythm is nice.

Disruptive shots break this rhythm. A change of pace. A change of timing. A change of spin. A change of direction. A disruptive shot can do all of this at the same time. A great example is a chop block. A normal block will return the ball with topspin. It can still be effective, but your opponent knows what to expect. He recognises the shot and can anticipate the pace, the timing and the spin. By contrast, a chop block changes the spin, the pace and the direction the ball moves. This can be very unsettling. Your opponent now has to adjust – and play a different stroke. The rhythm has been broken. If your opponent is hesitant – he will most likely play a weak shot or make an error. Nice. Your point.

Disruptive shots work because they are unusual. The technique is unfamiliar. As well as breaking the rhythm, your opponent may struggle to process the motion of the shot. If your opponent doesn’t know what spin is on the ball, it makes it hard to return. There is an element of surprise. When you only have a fraction of a second to make a decision – and you are unsure of the spin – it is very hard to play a good quality shot.

The master of disruption

It is very difficult to process what Craig is doing, when he is using unfamiliar looking strokes. My unconscious mind has no framework to deal with these shots, so I am usually too slow to react and make plenty of errors. Here is a video of some of Craig’s disruptive shots…

When should you use disruptive shots?

Disruptive shots can be hugely effective when playing against a traditional topspin player. Someone who wants to get into fast topspin rallies from mid-distance or even further back from the table. By mixing in disruptive shots you can keep the topspin player off-balance. You give him different spins, speeds, lengths and angles, and then it becomes much harder for the topspin player to find an attacking rhythm. He will start making more errors or play weaker shots, giving you easier opportunities to attack.

And then when you do switch to more conventional topspins and flicks, you’ll probably find these are more effective, as your opponent is more uncertain about what you are going to do. It’s the unpredictability of your play which can turn a good topspin player into an anxious wreck. Of course, you need to find a balance. If you try to play disruptive shots all the time, it will be easier for the other player to adapt. The key is to mix up disruptive shots and traditional shots. Keep the other player guessing.

You can experiment and be creative with disruptive shots. No rules apply! Your main focus is playing strokes which unexpectedly change the pace, spin, length or angle. It doesn’t really matter what you do or how unusual or unorthodox your stroke seems. You may even get comments from others that you are playing the shot in the wrong way. But as long as you can play the disruptive shot consistently, it will be effective against some players. These shots can be good fun to practise. It provides a bit of relief and distraction from your normal training routine. Plus you also learn how to manipulate the ball through your bat angle, timing, contact point and stroke action.

Disruptive shots are more advanced level. If you are a beginner or intermediate standard, I think it’s far better to focus mostly on developing traditional strokes – pushes, drives, topspins and flicks. You can return to these disruptive shots when you feel confident in doing all the basics well. However, if you already play at a high standard and want to evolve your game, disruptive shots are something worth experimenting with. You do need to practise them quite a lot to make them consistent, but if you can master a few disruptive shots you can use these to really mess up your opponent. 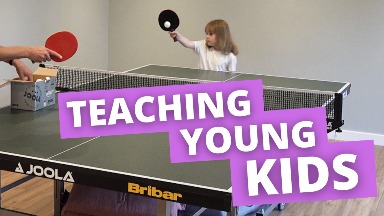