A lot of players at the intermediate level struggle to attack backspin balls. It’s one of the key skills which prevent them from playing at a higher level.

I’ve faced many opponents who are great at attacking a topspin or a blocked ball, but give them some backspin and their attacking game falls apart. If only they could learn to attack these backspin balls too, they would be quite formidable.

Step 1 – Get your technique right

The biggest mistake I see players make when trying to attack backspin balls is playing too flat. They try to hit through the ball, with the bat finishing quite low. Sometimes they are able to force the ball over the net, but more often the ball goes into the net or off the end of the table.

The key to attacking backspin balls is brushing upwards. Your bat needs to start a bit lower and finish higher than if you were trying to attack a topspin ball. You have to lift the backspin over the net.

The timing is very important too. Often players will contact the ball too early, again playing forwards, rather than up. This means they contact the top of the ball and aren’t able to lift the ball enough. If you wait a bit longer, you will be able to brush the back of the ball and you will find it much easier to spin the ball over the net.

Finally, don’t play the stroke too slowly, as you will struggle to lift the backspin over the net. It’s an all-body stroke. You need to use your legs, waist, arm and wrist to create upwards acceleration.

Here’s a video, which explains how to learn the basic forehand topspin technique…

To have any chance of attacking backspin balls in match-play, you need to get very consistent in practice drills first. Get a practice partner (or robot) to feed lots of backspin balls to your forehand. Focus on topspinning the ball cross-court, aiming to achieve a high level of consistency (90%+).

Topspinning cross-court is easier to begin with as the length of the table is longer if you play diagonally, so you have a bit more margin for error. You may need to hit 1,000 forehand topspins, before the stroke forms part of your muscle memory.

Step 3 – Practice one push, one topspin

When you start to achieve a high level of consistency playing forehand topspins off a regular feed of backspin balls, you should progress to playing a push (forehand or backhand), followed by a forehand topspin. This is more advanced than step 2, as you need to make the transition from one stroke (push) to another (topspin).

Step 4 – Become a master of placement

Practice topspinning to different positions. So far I have suggested topspinning cross-court, as this is easier to do to begin with. Now practice toppsinning down the line and also to the middle. Too often players are really good at attacking only one position on the the table, but the best players can attack any position.

Focus on the length of your attacks too. If you can consistently get the ball to bounce near the end of your opponent’s side of the table, you will put them under more pressure. Balls which bounce in the middle of the table are easier for your opponent to deal with.

Step 5 – Vary your spin and speed

If you play your forehand topspins with the same speed and spin every time, it’s easier for your opponent to adjust to your attacks. But if you mix up your speed and spin, you can cause havoc.

Some players block fast balls well, but struggle with slower balls. Other players punish slower topspins but get nowhere near fast topspins. Most players will struggle more if you mix up the speed and spin.

When you have mastered all of the above, you should start doing lots of irregular practice drills. These are drills where you don’t know where your opponent is going to play the ball. These drills mirror what actually happens during a match. If you can play forehand topspins consistently during these exercises, then you should easily be able to play the shot during competitive matches too. Here’s an example to get you started:

You can make this drill harder by getting your opponent to push long (3rd ball) to any position of the table, including the backhand corner.

How long does it take to get really good at forehand topspins?

As with anything in table tennis, you have to practice a lot to get very good. But if you follow the steps in this blog post, you will get there eventually. 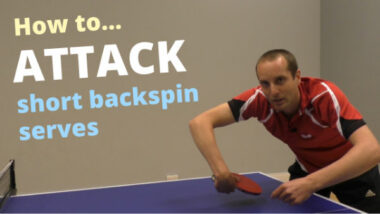 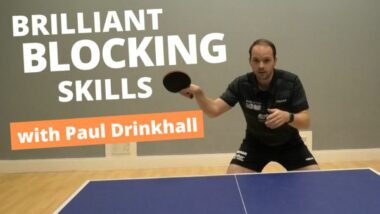