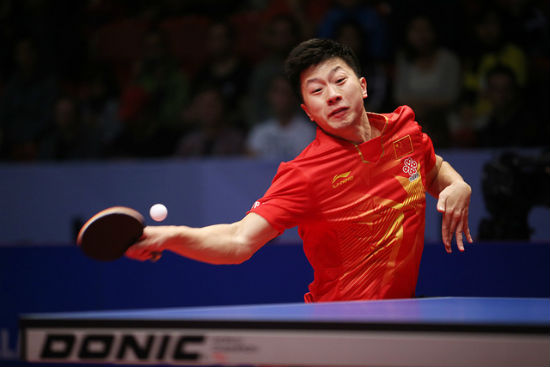 Quite simply, Chinese players are the best.

I’ve been watching the top four male players (Ma Long, Xu Xin, Fan Zhendong, Zhang Jike) quite a lot recently. It’s a joy to watch these players in their full attacking flow. Apart from the occasional surprise loss, their standard of play is in a different league to other players in the top 20.

From my many hours of watching these great players, I’ve identified a few things I think we can all learn from them and try and implement in our own game….

The top four Chinese players serve half-long most of the time. What’s a half-long serve? It’s a serve where the second bounce on the opponent’s half of the table (if given the chance), would land around the end of the table, either just before or just after.

Why half-long? It’s the area of uncertainty. It’s not easy to attack strongly but it’s also difficult to return the ball short. So it’s a fairly reliable way to set up a third ball attack. The Chinese players vary the spin of their serves – backspin, sidespin, topspin, no spin – but but the vast majority of serves are half-long.

The top four Chinese players try to attack at the earliest possible opportunity. They rarely push more than once in a rally. If the ball is short, they will flick, if the ball is a bit longer, they will get straight in with a topspin attack.

They rarely play soft blocks close to the table. If their opponent is attacking, the prefer to play a counter topspin. When they do block, they block aggressively.

They rarely lob. If they find themselves pushed back from the table, they prefer to play topspin to topspin until the rally is finished (and they usually win!).

The top four Chinese players attack with a lot of speed. This is a key difference between the Chinese style of play compared to many Europeans. The arm and wrist acceleration is phenomenal.

You don’t see them play too many slow and spinny topspins or careful construction of points. Almost all attacks are played with great speed with the intention of winning the point with every attack.

4. Play to the lines

The top four Chinese players play to the lines better than anyone else. They aim for the lines, either wide or long, with unrelenting frequency and accuracy. This puts their opponents under enormous pressure, forcing them away from the table and giving the Chinese players a big advantage in the rally.

Whenever possible, the top four Chinese players dominate rallies closer to the table. This has been a Chinese style of play for a long time and something European players are now trying to do more and more.

Of course, Chinese players are equally comfortable playing mid-distance or a few metres behind the the table, but staying closer to the table is the preferred option. Why? So they can attack quickly, taking time away from their opponents. When they rush their opponents, they force more errors and make it harder for their opponents to attack strongly.

Here’s a video of a recent match between Ma Long (world number one) and Dimitrij Ovtcharov (highest ranked European player) at the recent Men’s World Cup. It’s very clear to see all Ma Long using all of the above tactics throughout the match. Ovtcharov is fast, but at times Ma Long makes him look very slow. There’s a great point at 05:25, where Ma Long finds himself a few metres back from the table, but manages to work himself back close to the table, forces Ovtcharov back and wins the point. Great stuff.

If you want to play a little more like the top Chinese players, you know what you need to do. Serve half-long most of the time, attack everything with great speed and placement and try to dominate rallies close to the table.

Sounds easy, right? Not quite. To play this attacking style is very difficult. The only reason Chinese players do it so well is the ridiculous amount of training they put in, starting from a young age.

But it’s a playing style anyone can aspire to. If you attack a little more than you already do, if you speed up your attacks, if you aim for the lines more frequently and stay closer to the table more often than not, you will be a stronger attacking player. 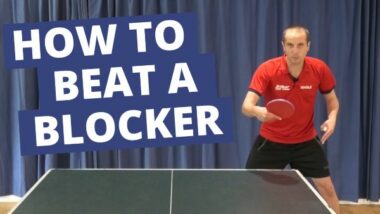