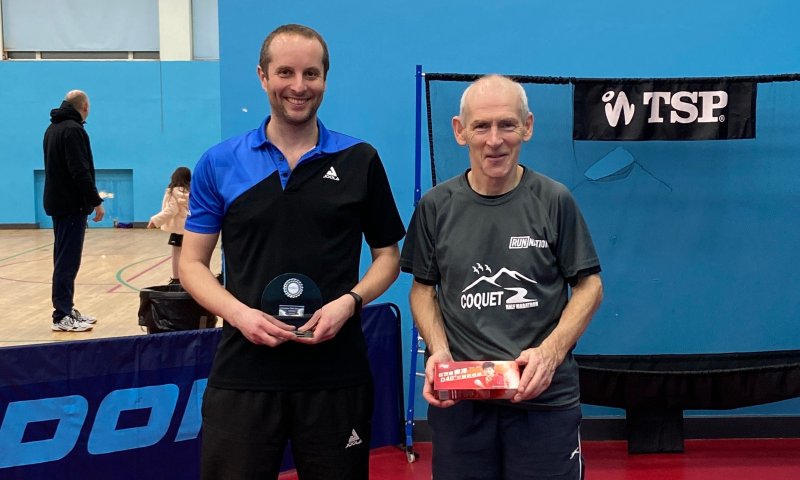 I have spent the past year competing in numerous veterans tournaments. Regular readers will know that it has been a tough experience. You can read previous tournament updates here, here and here. But there have been a couple of modest successes along the way. So it’s not all bad.

I’m going to look back at the past year and give an honest assessment of my progress. Have all of these tournaments been worthwhile? Have I improved? Should I keep trying? Or is it time to retire from tournament play?

Let’s start with some statistics.

In 2022 I played in six veterans ranking events:

I won two round robin groups, both in Nottingham. This earned me a whopping £30 in prize money and a nice little trophy (see image above).

Numbers can be deceiving

Looking at these statistics, particularly the 68.75% win rate, you may think that I have done quite well. But in truth, most of my victories have come against lower ranked players, particularly in the two round robin group tournaments in Nottingham.

And the simple truth is that the players ranked in the top 50 are much better than me. There are many seriously good players. I’m not even close. I have had a couple of 5 set matches against players in the top 100, but no victories. But in the matches I have played against the higher ranked players, I have been soundly thrashed!

So after 32 matches, I believe my ranking position of 387 is fairly accurate. I have beaten players ranked higher than this, so there is scope for me to get a higher ranking. But if I want to break through to the top 100, I will need to improve a lot more.

For the matches I have won, most have been very tough. I’ve had two or three comfortable wins, but the rest have been hard work. There have been many which I have won 3-2.

When I started playing the veterans tournaments, I don’t think I was expecting it to be so tough. But when you think about it, it’s fairly obvious. All the opponents I have faced have years or decades of solid match-play experience. Most tend to be competing in the top division of their local league. Even if the technique is variable, all of these players are strong on the tactical side of the game. They know their strengths. They know their weaknesses. Crucially, they have solid tactics to set up their strengths and avoid their weaknesses.

There have been many times when I thought I had a match won. I would win a game 11-4 and then expected to cruise to victory. But such is the tactical dexterity of these players, they can switch game plan, pick away at my weaknesses and turn the match around. I have rarely felt comfortable in any of my matches.

But even though the matches have been harder than I expected, as the year has progressed and I have increasingly embraced the challenge. I give each opponent lots of respect, regardless of age, size or perceived mobility issues. On more than one occasion I have played someone who barely seems to be able to walk or stand up from a chair. But once they get to the table they move like a whippet!

Where do we start? The high standard of opposition I have faced over the past year has made me much more aware of my many weaknesses. Here’s just a few.

In no particular order…

Footwork – My footwork is terrible. I stand too tall. I get too planted. I reach for balls. I am clumsy moving forwards. I am off-balance when I move back. There is so much work I need to do in this area.

Return of serve – I leak points against some opponents. In some games I give my opponent a 5 or 6 point advantage with missed returns of serve. I have no chance of beating better players if I don’t improve at this.

Playing safe – I have a tendency to go into my shell and play too passively, hoping my opponent will mess up. Maybe I do too much coaching, where I feed players with pushes and blocks, and this has become my default style. Or maybe I am just naturally a cautious person. Either way, playing passively doesn’t work against good players. If I play too safe, I get easily beaten.

Smashing – I have struggled against players who fish and lob. I don’t recall this being a problem before. Maybe I’m just playing better lobbers. But it has started to become a psychological ‘thing’. My smashes are going into the net or going long. I am losing confidence in my smashing ability. It’s not good.

One positive thing about having your weaknesses ruthlessly exposed is that it gives you the motivation to do something about it.

My big focus over the past year has been to develop all areas of my attacking game – forehand topspins, backhand topspins, flicks, third ball attacks, attacking combinations, footwork, placement – everything except smashing!

And I think there has been some progress. I have more confidence in my attacking game and I believe I am more consistent. My attacks don’t necessarily have more power or spin than before, but at least the shots are landing on the table more often. A step in the right direction.

I went through a stage of trying to be too aggressive when I played, but this didn’t work out too well. I made too many errors, which I found very frustrating. So I have toned it down a level which is still positive, but much more consistent.

I haven’t changed completely. I still have a tendency to go into coaching mode and play safe, but I find it much easier to switch gears and play more positive attacking table tennis when needed.

So how am I feeling? Do I want to continue playing veterans tournaments or is it time to retire?

What a silly question! I’m loving the challenge. Yes, it has been tough. Yes, I have had some thumpings. But it’s been a really enjoyable experience. And it’s been quite inspirational too, watching other veterans who are much older than me, play so much better than me. If they can do it, why can’t I?

And all this tournament play is starting to have an impact on my local league form. This season I have managed a few wins against some of the strongest players in my division. This hasn’t happened before. So something must be working.

What’s next? I plan to play some more tournaments in 2023. I will have more county matches in January and I have signed up for another 2-star tournament in Nottingham in April.

And then the big one. I have signed up for the 2023 European Veterans Championships in Norway in June. There will be thousands of competitors from across Europe. Apparently the standard is incredibly high. So I have no expectations of making any impression. I’m just going for the experience and to see if I can win at least one match.

And there is still time to sign up. So if you are 40+ and looking for a week of table tennis fun, then get yourself registered. If you are going, come and say hello. I’ll give an update of my experience later in the year.