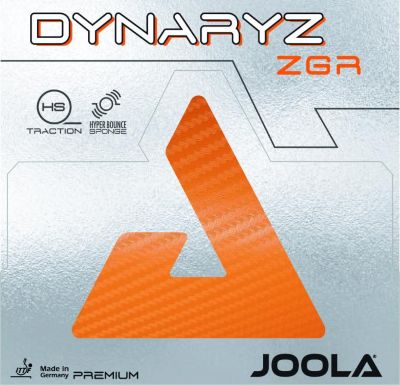 This month I have been testing the new JOOLA Dynaryz ZGR rubber.

This is an interesting rubber, as it is being marketed as hybrid style rubber – a tacky topsheet, but with a springy sponge.

I have always struggled with tacky rubbers. My all-round playing style, mixed with sub-optimal technique, means that when I have tried hard tacky rubbers, my shots often end up in the net!

I was expecting something similar with the Dynaryz ZGR. And after I glued the rubber onto my blade and bounced a few balls, my heart sank further. There didn’t seem to be much bounce, so I knew this was going to be a struggle for me.

Then I switched on my robot and started to hit a few balls. Hello! The rubber was a bit more lively than I was expecting.

Then I tried to topspin a few balls. Ding, blinkin’ dong! This rubber was nice!

Since that initial hit with my robot, I have been using the rubber in practice sessions and when I’m coaching. Here’s how I got on…

The idea behind the Dynaryz ZGR rubber is to combine a tacky topsheet (i.e. a Chinese style rubber), with a more springy sponge (i.e. a European style rubber). This allows the rubber to grip the ball easily – and generate spin – and the springy sponge gives some extra speed, so you don’t need professional standard technique to play fast and spinny shots.

And I have to say it is extremely good at gripping the ball, which makes playing topspin shots very easy to do. I can really feel the rubber picking up the ball and this sponge then propels the ball forward in a nice arc over the net. I find it easy to topspin close to the table and also further back, which is something I usually struggle with a little more. And counter topspins are just so nice. As long as I get the timing right, then the rubber just grips the ball and whips it back over the net. It’s probably the best rubber I have used to play crisp topspin shots.

How about the speed? I think there are faster rubbers available, but that’s not necessarily an advantage. By comparison, the JOOLA Dynaryz AGR is a very fast rubber, but I found this a little too hard to control. The Dynaryz ZGR is fast – especially if you commit to playing your topspins, but it just seems more consistent and accurate. I haven’t overhit many topspins. And if my technique is good, then I can still play with enough speed to finish a point.

My other concern with using a tacky rubber was that my passive game – especially my blocks – would suffer greatly. When I have tried tacky rubbers before, my blocks usually end up in the net.

But with Dynaryz ZGR, I found it very easy to block. The tacky topsheet helps control the spin of the incoming attack and because of the springy sponge, the ball jumps off nicely from the rubber and up over the net. I think it’s easier to block with this rubber, than with either my usual Rhyzer 48 and Rhyzer 43 rubbers.

Pushing is very good. This was expected. I can usually push well with a tacky rubber. I found a great benefit when pushing with my forehand. I can often pop a ball up with a forehand push, but I found I keep keep the ball lower over the net more often. Keeping the ball really short with a touch shot is also pretty easy to do with this rubber.

So even though I have been mainly testing out the topspin capabilities of the rubber, I have also been impressed with its performance in passive play.

What about service? One of the advantages of a very tacky rubber is that you can keep serves very tight and with very good spin.

With Dynaryz ZGR I found I could generate lots of spin with the tacky topsheet, but because of the springy sponge, then it was a little harder to keep the ball as tight as other very tacky rubbers.

But I’m being very picky here. I think I can serve tighter and with more spin than when using my Rhyzer rubbers. But compared to a Chinese style rubber it may not be as tight.

However, I had absolutely no problems when doing my long, fast spinny serves. These work very well, especially if I get a really whippy contact.

The one aspect I have found a little harder is looping backspin. If I try to loop a little half-heartedly, then I don’t seem to generate that much speed or spin. I feel like I can get away with using poorer technique more, when using my Rhyzer rubbers.

But if I do the loop properly, with good use of legs and acceleration, the loops are decent. I just need to make sure I loop with good technique every time.

If you have good looping technique, then you will be able to get lots of spin and speed from Dynaryz ZGR. If your looping technique is not so good, you may be better off with a faster European style rubber or get better at looping!

The JOOLA Dynaryz ZGR is a really good attacking rubber, especially when used on the forehand side. It is excellent at topspin and counter topspin, but also decent with more passive play. It has controllable speed, which makes it very consistent and accurate. But it also has a few gears – if you really commit to your attacking shots, then you can get a lot of speed and spin.

Normally when I test a new rubber, I enjoy the experience, but then put the rubber away and go back to what I was using before. But Dynaryz ZGR has really turned my head. I have found it’s topspin quality slightly addictive and I’m struggling to give it up!

So I have decided to use JOOLA Dynaryz ZGR as my forehand rubber for the coming league season. This is the first time I have changed rubbers since 2018. I really do like it that much.

If you’re in the UK, you can buy JOOLA Dynaryz ZGR from Bribar Table Tennis.

If you’re in the USA, you can buy JOOLA Dynaryz ZGR from Megaspin.

RELATED: If you want to understand how this rubber compares to other JOOLA rubbers, then please read my JOOLA Rubber Comparison Guide 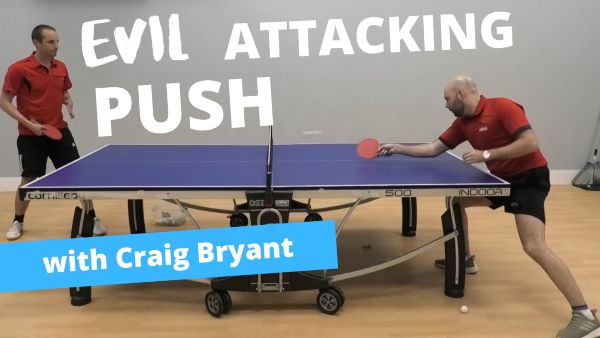