As you progress from an intermediate player to an advanced player, you will start playing more and more loopers. These are players who like to play big topspin shots (loops), whenever they can.

If you push a ball, they loop!

If you block a ball, they loop!

Even if you topspin a ball, they loop!

It can seem that no matter what you do, they are able to loop the ball back with heavy topspin. Fast loops, slow loops, loops out wide, loops to the body, loops everywhere!

You may find yourself constantly on the back foot, trying to contain the looper. But the more passive you become, the easier it is for the looper to topspin whenever they want.

So what the heck are you supposed to do against this looping onslaught?

Do not despair. Loopers are not unbeatable. Here’s a few of my favourite tactics to use when playing a looper. Give them a try and let me know how you get on in the comments box below.

Keep the ball short and low

Loopers usually play a little further back from the table. This gives them the space they need to execute their big topspin strokes. If you keep the ball short and low, you will jam them up over the table and they will find it much harder to use their loops. Serve short, return short, push short.

This is a containing tactic, but it can work. If the looper doesn’t have a strong game close to the table, they will make plenty of attacking errors or give you easy balls to attack.

Block or counter-attack with speed

If you find it difficult stopping a looper from opening up attacks, try blocking or counter-driving the ball back fast. A looper tends to have longer strokes. This is how they generate so much spin. But because their stroke is longer, their recovery time also tends to be slower. It takes them longer to get ready for the next shot.

Take advantage of this.

If you block back quickly, you will put a looper under much more pressure to keep their attack going. If you combine a fast block with excellent placement, you may even find that the looper doesn’t even attempt to play the next ball. It will be clean past them for a winner.

Keep the looper off balance

Changing the pace can really disrupt a looper’s timing. And some loopers find in-out movement difficult. You will force them to attack whilst off-balance, which is much harder to do.

Target the weaker side

Unless you play at a very, very high level, most loopers you face will have a stronger side and a weaker side. The stronger side is usually the forehand, although occasionally you will play a looper who is stronger on their backhand side.

Whichever side is strongest, target the other side. Go after the weaker side relentlessly.

Against a strong forehand looper, keep serving, pushing, blocking and topspinning to their backhand. This will take their forehand loop out of the game and they will be forced to play with their weaker backhand. Or they may try to step around the backhand corner to attack with their forehand. This will leave them exposed to quick blocks and counter-attacks in the opposite corner.

Get your attack in first

The worst thing to do against a looper is to be too passive. You need to give them something to worry about. Where possible, try to attack first. This can completely change the nature of the game.

A fast attacking ball is much harder to loop than a slow passive ball. When loopers start to worry about you attacking them, they’re own looping game can fall apart. They may stiffen up, start rushing their attacks or going for risky shots they wouldn’t usually attempt.

Loopers spend so much time looping, they don’t always have a strong defensive game. So if you can attack first, you may find it quite easy to win points, as they struggle to return your attacks.

Loopers are usually very good players. If you’re too passive or too predictable they will spin you off the table. You need to make it difficult for them to loop.

Keep the ball short and low. Block or counter-attack with speed. Keep them off-balance by moving them in and out of the table and side to side. Target their weaker side (if they have one). And don’t forget about your own attack. Where possible, get your attack in first.

If you use all of these tactics, you will make it much harder for the looper to attack consistently. And you will have a much better chance of winning.

What tactics do you use when playing a looper? Let me know in the comments box below. 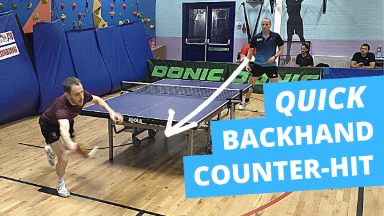