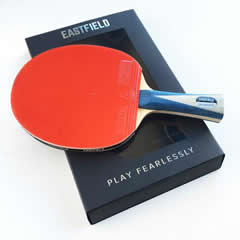 There’s a new table tennis brand on the market. The new brand, Eastfield, is the creation of Ben Larcombe, who runs the popular Expert Table Tennis website.

The first bat to be released under the Eastfield brand is the Eastfield Allround table tennis bat. This bat is aimed at players who are learning the game and want more control and feeling, rather than blistering speed.

Ben very kindly sent me an Eastfield Allround bat to try out. I’ve been using the bat on and off for the past month in my coaching sessions. Here’s my review…

Let’s start with the big positive. This bat is incredibly easy to play with. You don’t need to have perfect technique to keep the ball on the table. The rubbers and blade are designed to give you a bigger margin of error compared to really fast bats. So if you don’t quite get your stroke right, you still have a decent chance of the ball landing on the table.

The Eastfield Allround table tennis bat is great for playing push shots. It’s very easy to keep pushes low over the net with plenty of backspin. As the rubbers are not that sensitive to incoming spin, the ball hardly ever popped up when I played a push shot. Blocking is also very easy. I felt I could block all day long, especially against the big spin shots.

All of this control does come at a price though. The Eastfield Allround table tennis bat is quite slow to play with. Certainly when you compare it to the Palio Expert table tennis bat (review here), which is another bat aimed at beginners / improvers, it does feel noticeably slower.

You really have to extend your stroke and use a bit more physical power to generate some fast shots. So it is possible to play fast attacks, you just have to commit to the attack a bit more – the rubbers aren’t going to do the work for you.

If you’re a beginner player this isn’t necessarily a bad thing. With a slower bat there is less chance you will overhit attacks. And you will have to focus more on playing with good technique to generate speed rather than relying on the bat.

You can generate decent spin with these rubbers. I was able to keep my serves low over the net and get plenty of sidespin and backspin.

When playing topspin attacks, the rubbers grip the ball nicely. But due to the slowness of the bat, my topspin attacks weren’t blisteringly fast. To get really fast and spinny loops, I had to work physically harder.

Again, this isn’t such a bad thing if you’re a beginner player, as you really need a bat with more control rather than speed to begin with. The key point is that it is easy to generate topspin with the Eastfield Allround table tennis bat, just don’t expect you’re topspins to be super fast.

I think the Eastfield Allround table tennis bat is an excellent choice for beginner players. The high level of control makes it very easy to play with. You will find it easier to keep the ball on the table compared to faster bats on the market. Even though the bat is a little slower than other good beginner bats, the benefit of this is that you will need to develop good technique to play faster shots.

I think the Eastfield Allround table tennis bat could also be a really good choice for a more experienced player who likes to play a steady, controlling game and likes to slow the game down. The bat is very easy to push and block with and you could really mess up your opponent’s timing by taking the pace off the ball. There are plenty of these type of players in local league and they could benefit from using this bat.

The cost of the Eastfield Allround table tennis bat, at time of writing, is £49.95. This is more expensive than other bats aimed at beginners, but a heck of a lot cheaper than most custom made table tennis bats.

In defence of the price, I do feel the bat is very well made. Some of the bats aimed at beginners feel a bit flimsy, but this is a high quality bat made with good materials. You should get plenty of use out of it. And because it is custom made (rather than factory produced), you will easily be able to replace the rubbers when needed.

The Eastfield Allround is a high quality starter table tennis bat. It is very easy to play with, with high levels of control. It’s not as fast as other beginner bats, but you can generate speed with good technique. The rubbers are grippy, so it’s pretty easy to spin the ball. It’s an ideal bat for beginners or more experienced players who like to play a steady, controlling game.

Finally, I would like to give some praise to Ben Larcombe for creating a new table tennis brand. There is a huge amount of competition and some pretty huge, established brands, such as Butterfly, Stiga, DHS, Joola, Donic and Yasaka, which dominate the market. It’s a tough task getting a new bat to market (and approved by ITTF!) and Ben has succeeded in producing a very nice bat indeed. I know he has plans for another bat aimed at advanced players, so I’m looking forward to giving that a try too. 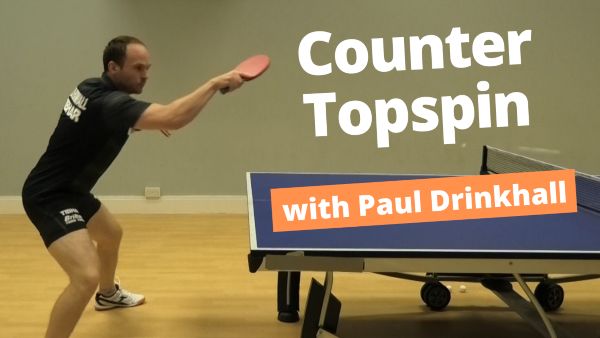 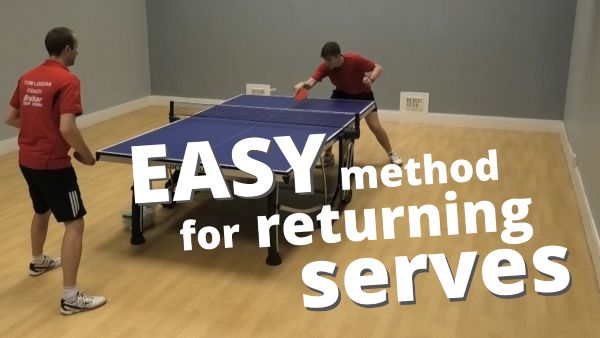